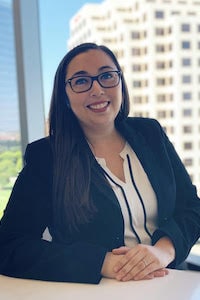 Brenda Armenta is an associate at Workplace Justice Advocates, PLC. For the last few years, she has worked closely with Partner Tamara Freeze in litigating claims on behalf of employees for harassment, discrimination, retaliation, and other disputes. Because of her demonstrable passion for advocating for employees' rights, Ms. Armenta was one of only 13 recipients in California to earn the 2020 Employee Justice Summer Clerkship from the Foundation for Advocacy, Inclusion, & Resources (created by members of the California Employment Lawyers Association).

Ms. Armenta earned her Bachelor's degree in Political Science from the University of Southern California in 2016, after having transferred from El Camino Community College. Ms. Armenta is passionate about serving her community. During her time at USC, Ms. Armenta worked with USC Gould School of Law Professors on the Immigrant Detention Study, in which she translated interviews conducted on detainees in immigration detention centers from Spanish to English and observed immigration hearings. Ms. Armenta also worked on numerous local government campaigns for approximately four years as a canvasser, phone banker, and even helped manage teams of volunteers and canvassers after her first year on the job. She also worked as an assistant teacher at her local YMCA in Downey.

Contact Us
Practice Areas
Client Reviews
★★★★★
I just wanted to take a moment to say thank you for all of the hard work and dedication that led to yesterday's outcome. I really truly appreciate all that you have done over the last two years. The good guys prevailed!!! You really do provide a valuable service to the world in protecting the rights of good people who have been harmed. And it's always nice when we can make money while also doing good in the world. Rick
Submit a Law Firm Client Review